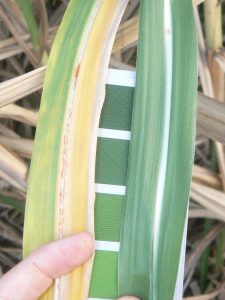 Sugarcane farming systems on the east coast of Australia appear to be in serious decline. The recent heralding of Yellow Canopy Syndrome as a major issue for cane is worrying for the industry. As a crop scientist I concur, but whereas specialists in the industry seem to be proclaiming little insight as to its cause, to me the leaf symptoms resemble those of deficiencies in the macro nutrients: nitrogen, phosphorus, potassium or sulphur.

The recent widespread incidence of poor crop growth in cane is reasonable. Current sugarcane farming systems are essentially long-term monocultures and investigation would surely reveal declining soil quality, limited amounts of soil organic biomass and declining mineralisation and dissolution of the soil nutrients essential for crop growth. For decades sugarcane crops have been dependent on the application of industrial fertiliser to sustain crop growth, and the recent trend towards using lesser amounts of industrial fertiliser could explain the onset of symptoms of nutrient deficiency in cane leaves.

Achieving better crop nutrition yet using less fertiliser is a difficult proposition for farmers. It can be done by matching nutrient supply to the time that the crop is using nutrients for growth. It requires not just a basic measurement of what nutrients may be lacking in the soil as gained from the standard soil tests; but also precise knowledge about how those nutrients are held in the soil and the rate at which they are released into the fine root zone of the sugar cane plant. It is not fertiliser in the soil but rather nutrients in the plant that determines crop growth.

Changing the soil’s capacity to hold and then slowly release nutrients to the crop is perhaps the single most-effective crop management tool that is not currently practiced in the sugarcane industry. Farmers need data and advice to substantially increase the amount of labile (active) organic carbon in their soils so they can manage fertiliser application and sustain crop growth rates.

Organic carbon in sugarcane soils is generally less than 1% and mostly exists in forms that are resistant to decomposition by soil microbes. The amount of labile soil carbon which is active in the processes of microbial decomposition, immobilisation and mineralisation (nutrient storage and release) is much less and undoubtedly limiting to crop growth. Soil carbon levels are so poor that even in a system that retains all cane leaves as a green-trash blanket and grows legume crops such as soybean in the plough-out regaining enough carbon to restore soil fertility and sustain sugarcane growth may take decades.

My view is that farmers need to invest time, effort and money to increase the level of labile organic carbon in their soils. Then they can recalibrate their fertiliser management to sustain maximum yields. How they can do it requires new technology. For example farmers may undertake ley carbon farming on a portion of their land; or grow carbon crops and spread the biomass or manufactured, resilient, carbon products onto their sugarcane soils. Novel research is needed.