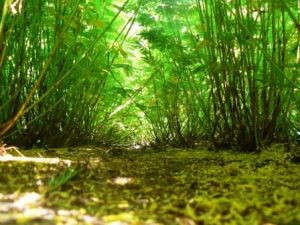 Progardes™ is a blend of different types of Desmanthus sp. a tropically-adapted legume that has been newly-released for over-sowing into the vast, grassy, clay-soil plains of northern Australia. Progardes™ are sub-shrubs with thin stems, fine leaves, woody base and deep tap-roots. As forage it has nutritive value similar to that of lucerne.

Seed for sowing the legume pasture is currently being grown in the Burdekin River Irrigation Area and at Mareeba. The seed crops are sown at the start of the wet-season and harvested in the period from late-April to July. Consequently, seed crops are a little too late-maturing to be grown during the plough-out period of the sugarcane crop. Instead, Progardes™ could be grown for tropical hay or more likely as a green-manure crop.

As a green manure, Progardes™ can accumulate 15 tonnes/hectare of above-ground dry biomass. About one-third of the biomass is carbon so 5 tonnes/hectare of carbon in the form of mostly woody organic matter can be incorporated into the soil. And about one third of that carbon can be converted to humus which results in an increase of about 0.15% soil carbon per crop over the long-term. The amount of carbon in stable organic matter generated by a Progardes™ break-crop is small but any incremental increase in soil organic carbon is an important change to the health of sugarcane farming systems.

While organic carbon is consumed and transformed into stable humus, and lost from the soil as carbon dioxide, other elements: nitrogen, phosphorus, potassium and sulphur; are gradually released into the soil solution and become available to be taken up by plant roots.

The benefit to be gained from incorporating residues comes not only from the other nutrients that the residues contain, but from the rates of organic matter decomposition and nutrient release. Residues that are poor in nitrogen can also absorb nitrogen from the soil or fertiliser, and re-release that nitrogen later-on when they decompose.

The skill of farmers is to manage the organic matter levels in the soil, rates of nutrient release and fertiliser application to match the demand for nutrients to sustain crop growth. That’s not easy.

Progardes™ offers farmers a different break-crop to those such as soybean. It has more residues which are much woodier and has much greater capacity to store and slowly release nutrients.

Progardes is a relatively easy crop to grow; seed is sown with a small amount of starter fertiliser; weed control; supplementary irrigation and before seed-set the crop is foraged or mulched. With a compatible sowing configuration, sugarcane can be planted with minimal cultivation. Progardes™ that set seeds will persist in the field because it is hard-seeded, but it is a broad-leaf and a weak competitor, and the experience of growing cane after seed crops has presented no problems to the sugarcane.

Enquiries about Progardes™ can be directed to Agrimix Pty Ltd.