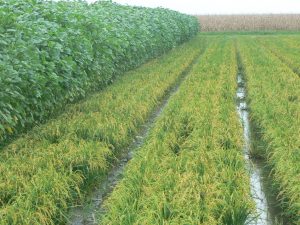 Farmers are organized people and modern farms are precisely laid-out and strictly regimented. Crops stand to attention in straight rows each plant the same as the next. Farmers create this parade-ground by planning, analysis and execution. They have tractors that steer perfect rows, machines that sow seed precisely and yield monitors that apportion next year’s fertilizer even before this year’s grain hits the silo. Just like army generals, farmers and agronomists use sensors and data and graphs and computer models to analyse past crops and trial scenarios.

Scientists bolster this system of crop production. Empirical models now integrate crop performance against weather and resources over time and those models find minute inefficiencies in production and economics. The technology involved in farming is phenomenal and getting better, and farmers are adopting it and getting better at farming.

Plants also achieve perfection. They grow leaves and stems and flowers and seed with architectural symmetry, and they flower with imperfect synchrony to the seasons. How can that be? Plants have no way of planning; they have no memory nor can plants imagine the future. And despite widely-held beliefs to the contrary, plants do not house internal clocks, so they have no way of telling time. Plants only respond to the here-and-now, but despite that circumstance they stand to attention like soldiers, imperfectly the same as every other plant in the field.

There is a growing misalliance between farmers and their crops; they go about the same business but in completely different ways. In Australia where I do most of my work, I observe that this bifurcation often constrains the scope for agronomic improvements. One could easily fault the farmer, but it may be that the plants too have a narrowing focus, taking defensive traits against environments seen by their makers to be increasingly-degraded and hostile.

My opinion is that farmers and scientists need not focus so much on applying genes and water and fertilizer to gain a marginal increase in crop yield. Instead they should create in their minds a picture of what a productive crop looks like and work out what is required at all of its stages of growth to sustain its biological yield. An approach based on that rationale will surely reveal ways to enhance production from agricultural fields. Tend the soil but feed and water the plant.

To take the plant’s view of agriculture, agronomists will need to relearn the fine sciences of the 1980s and well-before, when botanists and physiologists dissected leaves and flowers and grains to study crop growth and yield. With those methods and today’s never-before-dreamed-about technologies, discoveries to reinvigorate the biology of farming systems will surely abound.

Agriculture in the future may be about the specialization of the gene pool, but it will almost certainly progress more soundly if it is grounded in the skills and prides of farmers and scientists to sustain the growth at each-and-every moment of each-and-every plant standing in the fields.